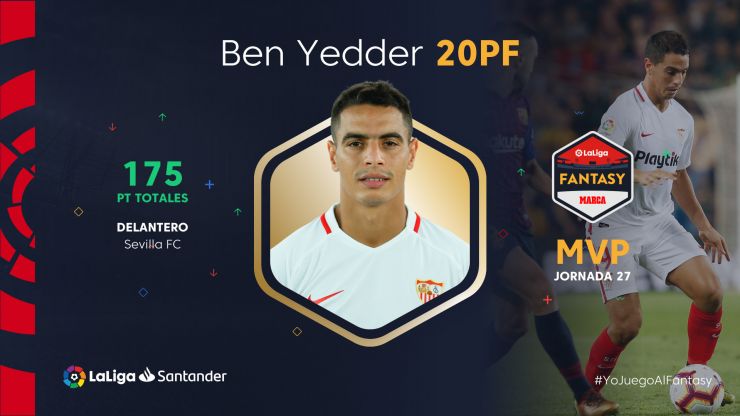 These are the 11 players who racked up the highest number of points on Matchday 27 of the 2018/19 league campaign.

Matchday 27 of LaLiga Santander has drawn to a close, so now it’s time to look over the LaLiga Fantasy Marca Best XI from this set of games.

This side is comprised of players from eight different clubs - CD Leganes, Atletico Madrid, FC Barcelona, Villarreal CF, Sevilla FC, SD Eibar, Real Madrid and D. Alaves. It’s Barcelona, Madrid and Sevilla players who have the greatest representation, with two players apiece from these clubs. Among these is the Player of the Matchday, Wissam Ben Yedder, who scored 20 Fantasy Points thanks to his stellar performance for his club against Real Sociedad.

The goalkeeper in this XI is Leganes’s Andriy Lunin, who earned 11 points. Although his performance wasn’t enough for his side to avoid defeat in the Wanda Metropolitano, he did manage to save a penalty from Saul Ñiguez and shone throughout against Atletico.

In front of Lulin is the back three consisting of Atletico’s Jose Maria Gimenez and Villarreal’s Jaume Costa, who both scored 11 points, and Barcelona’s Gerard Pique, who claimed 12. 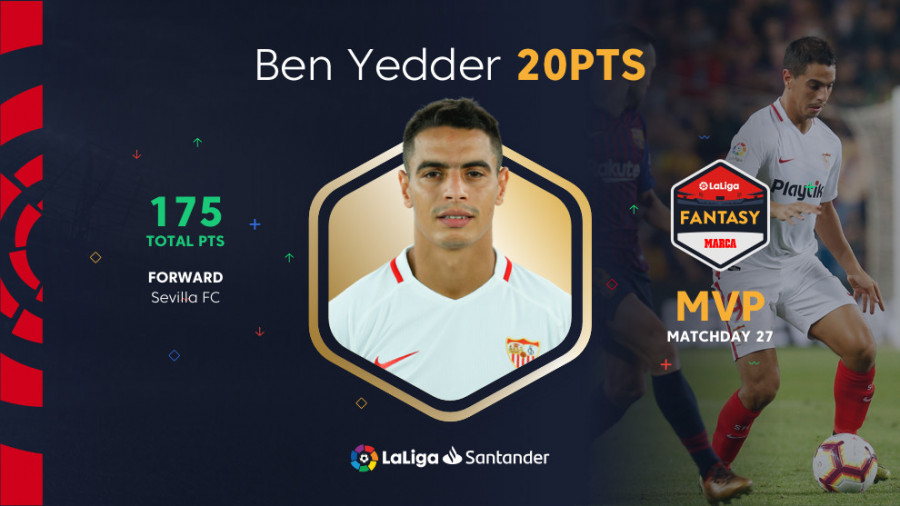 The midfield is blessed with four technically gifted players. Sevilla’s Pablo Sarabia, who opened the scoring for his side against Real Sociedad and Fabian Orellana, who starred for his side against Alaves, both claimed 11 points. Meanwhile, Luka Modric, who rounded the goals for Madrid against R. Valladolid, and Jony, the best player on the pitch for his side Alaves as they picked up a point against Eibar, earned 13 and 14 points respectively.

This team is rounded off by a potent attacking trio made up of Karim Benzema, Lionel Messi and Wissam Ben Yedder, who scored 14, 17 and 20 points respectively. Madrid’s Frenchman notched a brace, Barcelona’s Argentine ace struck one and Sevilla’s Player of the Matchday hit a hat-trick, more than enough for them to earn their place in this side.

Don't have a LaLiga Fantasy MARCA team yet? Awaken your inner coach by downloading the game, create a league with friends or sign up to the public leagues and get competing with other like-minded lovers of Spanish football. The game is available on mobile devices and tablets and can also be played online via Facebook.*

For more information, visit www.laligafantasymarca.comand join the LaLiga Fantasy MARCA community on the game's official Facebook page (currently only available in Spanish). Use the hashtag #YoJuegoAlFantasy** to exchange views with other social media users and further liven up the action in the planet's top fantasy football experience***.