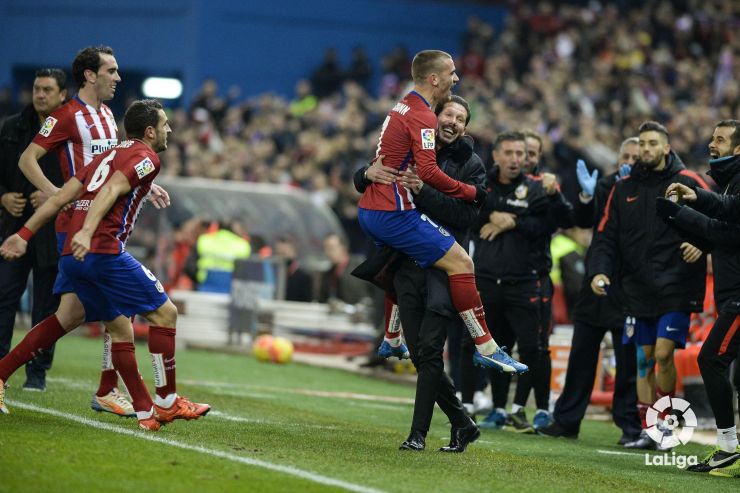 Athletic made life difficult for the hosts, but Griezmann secured a 2-1 comeback win that puts them level on points with leaders Barcelona

Former Atletico fan-favourite Raul Garcia was given a warm welcome on his return to the Calderon, where he was a key figure in their Liga BBVA title winning year in 2013/2014.

That was quickly put to one side once the game started in a typically high-tempo opening from Diego Simeone’s men, but Athletic Club settled into the game quickly with a disciplined display.

After 26 minutes, a long ball forward was brought down by Athletic’s Aritz Aduriz and his first-time lob was turned over the bar by home keeper Jan Oblak.

From the following corner the ball was flicked on from the near post and French defender Aymeric Laporte arrived at the far post to thump the ball into the roof of the net. It was the first goal the hosts had conceded at home in five LaLiga matches.

Athletic Club were comfortably holding Atletico at bay until added time at the end of the first half, when goalkeeper Gorka Iraizoz, in his 300th appearance in the Liga BBVA, dived to turn away a fine shot from Belgian winger Yannick Carrasco.

At the ensuing corner midfielder Saul Niguez rose to head the equaliser at the near post scoring his first LaLiga goal this season.

Atletico’s Slovenian keeper Oblak was called into action to turn away Eneko Boveda’s cross-cum-shot, and then to deny Aduriz in a one-on-one early after the re-start as Athletic continued to unsettle their misfiring hosts.

Griezmann to the rescue

France striker Antoine Griezmann had been having a quite game, but popped up on the edge of the area after 67 minutes and curled a superb shot just inside the post for his eighth of the season.

The Basques made Atletico suffer in the closing stages but Simeone’s men stood firm for a fifth straight win in LaLiga and an extended their unbeaten run to nine games.