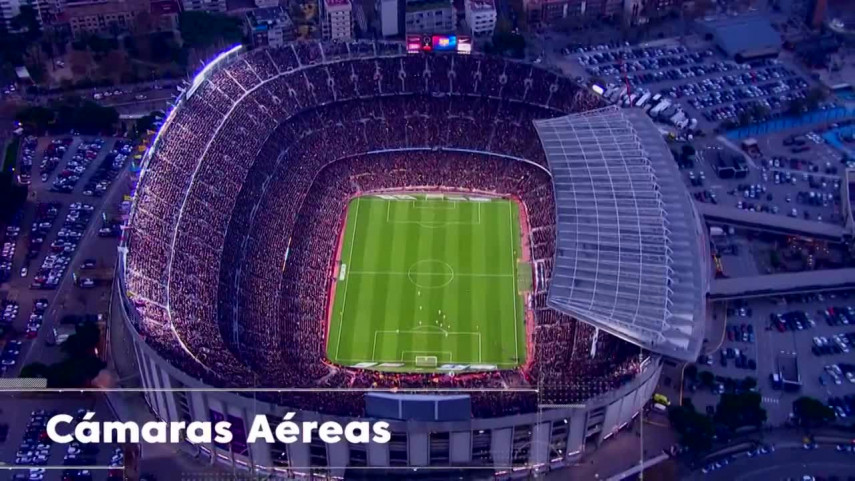 Football as it has never been seen before

LaLiga's commitment to innovation makes the Spanish league a pioneer for cutting-edge broadcasting.

Delivering broadcasts of the very highest quality will remain a priority for LaLiga during the 2017/18 campaign. Indeed, LaLiga and its official producer, MEDIAPRO, will be taking the league's productions to the next level and enabling fans to experience matches in more detail than ever. LaLiga, which is committed to being at the forefront in the use of game-changing broadcasting technology, will be rolling out all sorts of new audiovisual content and innovations this season, hand in hand with the LaLiga Santander and LaLiga 1|2|3 clubs.

The biggest new production feature in LaLiga Santander will be the incorporation of real-time statistics. The whole gamut of tracking data and analytics will be available to enhance the viewing experience. Thanks to in-game performance stats and 3D graphics from ChyronHego, viewers will get the full picture on everything that is happening out on the pitch.

Similarly, up to two games per matchday (including every single FC Barcelona and Real Madrid fixture) will be produced in 4K quality. Furthermore, a permanent aerial camera has been installed at three more stadiums: Malaga CF's Estadio La Rosaleda, RCD Espanyol's RCDE Stadium and Real Betis's Estadio Benito Villamarin. As a result, nine of the grounds in LaLiga Santander are now equipped with this technology, more than in any other league in the world. Moreover, new high-speed cameras have been placed in the corners of the stadiums, allowing producers to capture the best possible footage for use in super-slow-motion replays.

Speaking of replays, LaLiga broke new ground last season as the first football competition in the world to offer broadcasters Intel's 360º replays, with the Camp Nou and Santiago Bernabeu becoming the first stadiums in Europe to be equipped with this innovative technology. The organisation will be moving the dial even further this term by installing the system at the Sanchez-Pizjuan and the brand-new Estadio Wanda Metropolitano.

On another note, for the first time ever, a unified lettering scheme will be used for the names and numbers on the back of LaLiga Santander and LaLiga 1|2|3 clubs' shirts, with an exclusive design for LaLiga that will make it easier for supporters to identify players.

LaLiga is also upping its game in terms of providing interesting exclusive content for its TV broadcasters. Last month, the organisation launched a globally distributed channel offering day-long, fully scripted programming dedicated to LaLiga, in full HD. This channel includes commentary in English and Spanish, as well as a soundtrack.

Another of the highlights this season is LaLiga's new live studio show, filmed entirely in English. Presented by Simon Hanley, who is joined by two pundits, the programme previews the round of fixtures ahead before the first game of each matchday.

Last but not least, an automatically controlled tactical camera will be in use at every LaLiga Santander and LaLiga 1|2|3 stadium this term, following the action and providing the teams' analysts – in addition to broadcasters – with live tactical shots. The feed can be analysed in real time within the stadium, as well as being streamable anywhere, anytime for on-demand use. This solution means that analysts will have all the information they need to hand, in a user-friendly and uniform format.

Founded in 1984, LaLiga is a sports association comprising the 42 teams that make up the first and second divisions of professional football in Spain. LaLiga, based in Madrid, is responsible for the LaLiga Santander and LaLiga 1|2|3 leagues and the television production, which in the 2016/2017 season reached more than 2.5 billion people globally. The association also has an active foundation and is the world’s only professional football league with a league for intellectually challenged footballers: LaLiga Genuine.