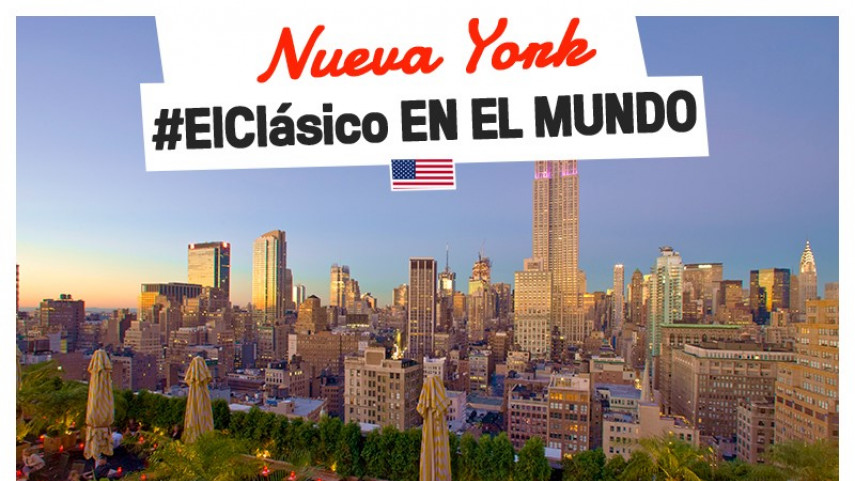 The best of Spanish Soccer meets the NYC skyline

LaLiga, the organizing body of top-flight Spanish soccer, will be hosting in the United States a viewing party of the El Clásico match between two of the world’s biggest clubs - Real Madrid CF and FC Barcelona. The event will take place in New York City on Sunday, April 23rd from 10am to 7pm, with a 2:45pm kickoff (local time). The match will be live streamed from beIN Sports, exclusive USA broadcaster of LaLiga.

LaLiga, the best domestic club competition on the planet made up of 20 teams with over 1.6 billion fans globally, is excited to bring the world’s largest sporting league and the energy of this legendary match to the capital of the world, New York City. El Clásico clash between Real Madrid CF vs. FC Barcelona is arguably the biggest fixture of the year, and LaLiga intends to bring this excitement to life through an immersive rooftop experience at 230 Fifth Avenue, with expansive, panoramic views of the NYC skyline.

The free, day-long event will give domestic and international sports fans a taste of Spain – from soccer to cuisine to entertainment, and demonstrate a new platform of international expansion for LaLiga brand. The venue will feature exhibition displays from FC Barcelona and Real Madrid CF, an interactive soccer tech zone, music and live entertainment, a rooftop mini soccer pitch, as well as large screen TVs throughout the 24,000-square foot venue to watch the match.

Special appearances will be made by Raúl González Blanco, a legendary Spanish player of LaLiga, along with other guests. Raúl currently serves the role as Country Manager for LaLiga’s USA office, which opened in January 2016 to cultivate its American fan base, implement the Spanish soccer philosophy through grassroots efforts, and achieve business growth through partnerships, sponsorships, promotions, publicity and social media.

‘With the opening of our LaLiga USA office just over a year ago, it is time for us to officially introduce ourselves to our American fans,” says Raúl. “El Clásico provides the perfect moment for us to do this, showcasing the best of what Spanish soccer has to offer while celebrating the incredible fan base that we have in this country, especially here in New York City.”
Entry for this event is free and all-ages with registration at: https://www.laliga.es/elclasiconyc/