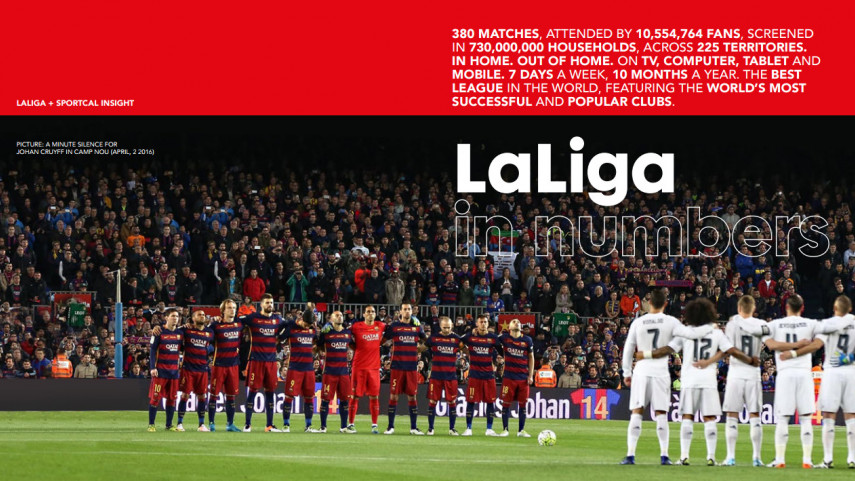 Sportcal analyse how increasing numbers of fans are tuning in to LaLiga on television, online and through mobile devices.

The latest Sportcal Insight survey proves that more people are tuning in to engage with LaLiga, the best league in the world in terms of sheer quality, in more ways than ever before. Increasing numbers of fans are tuning in not just at home on television but out of home, online and via mobile devices, and those audiences engaging with live LaLiga action are double those traditionally measured.

“LaLiga offers compelling and technically brilliant football, played in some of the biggest and most vibrant stadiums by a cosmopolitan cast. Live broadcasts of LaLiga matches will reach new audiences from 2016-17 onwards, thanks to the best-ever rights deals in territories across all continents. Fans follow the competition not just because of the most stellar names in sport, but because it offers a phenomenal melting pot of talent.

"Research focused on 11 key markets, including the most populous nations in the Americas, Asia and the MENA region, as well as major nations across Europe and Africa. Using a baseline number of those watching in the home on television (IHTV), the uplift in the real total viewing figures ranges from 40% in Brazil to 184% in Egypt. In other words, for every 100 fans known to be watching at home on TV in Brazil, another 40 are watching in other ways. And for every 100 watching IHTV in Egypt, another 184 are watching in other ways as well."