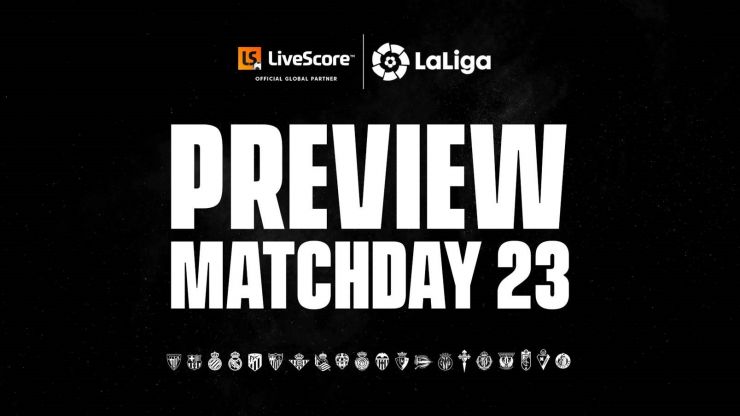 Getafe CF and Valencia CF will also face each other in what will be the big match of the weekend.

Real Madrid rattled off their fourth-straight win over the weekend with a 1-0 Madrid derby victory over arch-rivals Atletico de Madrid, a result that ensured they stayed atop LaLiga Santander. They now not only boast a three-point advantage over FC Barcelona but also are ahead on goal difference. They have Spain’s stingiest defence and even with a plethora of injuries to key attackers they remain a consistent offensive unit. Eden Hazard and Gareth Bale are expected to return in a further boost for Los Blancos. They travel to play C.A. Osasuna on matchday 23 to play a side that have won just one game in their last five. They haven’t beaten Real Madrid since 2011 and lost 2-0 earlier this season.

FC Barcelona did just enough to knock off Levante UD on Sunday evening, largely thanks to Ansu Fati’s double. However, FC Barcelona are not finding their best football this season despite they have one of the greatest players in the history of the. The lack of a substitute for Luis Suarez makes the role of Leo Messi even more important until the end of the season. They travel to play Real Betis on the weekend who’ve won just one of their past five and who were throttled 5-2 by the champions earlier in the season. FC Barcelona will be looking for a similar performance.

Atletico de Madrid tumbled into sixth on the table after their Madrid derby loss to Real Madrid, their second loss in their last three games. They remain only a win outside of the first positions but they are struggling to score goals. They were touted as potential champions by many before the season, and now it looks as though they’ll struggle to make Europe. Granada CF are their next challenge, a team they drew 1-1 with earlier this season. Now all they are worth is a victory.

Getafe CF climbed into third thanks to their third-consecutive win, a statement-making 2-0 victory away to Athletic Club. They are one of the form teams in LaLiga Santander and coincidentally play another side in a rich vein of form on matchday 23 as Valencia CF come to town. Valencia CF backed up their huge 2-0 win over FC Barcelona with a less impressive 1-0 win at home to RC Celta. This game should be a spectacular one for neutral fans and could have a significant impact on the logjam surrounding the battle for European football. The earlier game this season finished 3-3, let’s hope for a repeat.

Follow all the results and the standings from the second round of matches in LaLiga Santander on www.livescore.com